Coal Related Deaths are Higher than Nuclear: What are we so Afraid of?

According to the World Health Organization, coal related deaths far outnumber those caused by nuclear power—even after taking into account the terrible Chernobyl catastrophe. The chart below shows the number of deaths per terawatt: 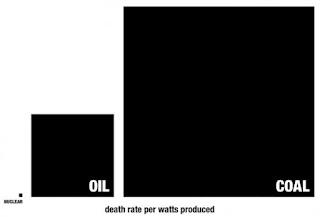 Perhaps the biggest concern with nuclear power is the potential for wide-spread contamination of the environment, which would negatively affect both the ability to sustain food sources and human lives. Not to mention that ‘nuclear’ conjures up the image of Hiroshima, atom bombs, and various other radiation related atrocities. However, coal is a continuous killer—responsible for 4,025 deaths per every ONE nuclear energy death—and unlike nuclear deaths, is mostly silent.
Knowing what we know about the two, we have to ask again—What are we so afraid of?
~Erin Bovelle~
Source: http://www.livescience.com/13876-nuclear-energy-dangers-coal.html